The Max Pashm Band grabbed my attention with the release of their new album, Never Mind The Balkans Here’s Max Pashm. The band immediately hits you with their engaging style and British sense of humor. This band is F-U-N! The band’s MySpace page lists their musical style as KlezmerBalkanGreekGypsyPunk with Electro-beats. That’s quite a mouthful, but that’s what they are. When you listen you can hear all these elements weave their magic.

Klezmer fans will recognize band members Merlin Shepherd on Clarinet and Polina Shepherd on Piano and Vocals. But also take note of the outstanding Bouzouki of George Kypreos and Vocals by Eugenia Georgieva, plus guest appearances from the bands Fanfara and Baghdaddies. The Max Pashm sound is a unique blend of traditional Greek/Balkan/Gypsy & Klezmer music, fused with high energy electronic beats & digitally manipulated fx.

The opening track, Imnul (Kish Mayn Tokhes) shows what Max Pashm is all about. The first thing we hear is a scratchy old radio broadcast saying “This is Radio Pashm calling.” Reminiscent of the famous “This is London calling” from WW II, we then hear the old radio tuning through the stations when suddenly the wind begins to blow and we hear the call of the solo Trumpet with Bouzouki. Then we hear the Brass, Electronica, and Yiddish Vocals. This is a true blending of styles, and gets us in the right frame of mind for all that follows. Fanfara appears again on Manea-K, where the Balkan theme is prominent in the Brass, but also sounds authentic on Bouzouki and Clarinet in their own styles.

Fight On The Streets continues with an opening radio quote from Churchill that puts us in the fighting mood. The heavy beats behind the Greek/Klezmer theme make for an interesting blend. Unlikely as it seems, this is one of the best tracks on the album. The band does an excellent job with songs of this sort, blurring the line between the musical cultures.

Max does an amazing job on the (primarily) Greek tunes as well, bringing in some top notch Greek musicians to ensure authenticity, to which he adds just the right amount of Electronics and Beats. Using Bouzouki, Baglama, Tsoura, and Cretan Lyra, the tracks Rembeteli, Klezmernaki (with guest band Baghdaddies), Once Upon A Time In Hellas bring Greek music to the forefront of the World Music scene, with high energy and interesting DJ effects. Also of note is the Clarinet solo by Pavlos Papadakis and Greek Vocal on Rembeteli. The a cappella Bulgarian Vocal on I Neno is ethereal and serves as a nice break in the action.

Klezmer gets its own special treatment by Max. Anarchy has a Yiddish Vocal, mixed with English Rap and Electronica, but nimbly blending a traditional song along the way. If I have to single out a favorite track on the album, this would be the one, as it has all the elements I look for in a great, hip Klezmer song.

The Calling gives a nice instrumental solo break with a beautiful Cretan Lyra solo, reminiscent of a Klezmer Violin of Eastern Europe.

Max changes gears on The Tongue (Lick a Little). Once again the song starts with a scratchy old 78 record sound with Clarinet and Bouzouki, then morphs into the contemporary Pashm sound with the Club beats and English Rap mixed with a traditional Jewish Nign. Then the song switches to a Greek version of the theme before returning to the Klezmer version again. It is quite fascinating to me how the Klezmer and Greek styles can be switched so easily and also blended together to create a more unique style. It’s difficult to describe, but is thoroughly enjoyable.

Angels is another example of Pashm blurring styles. Using Bulgarian Vocal, English Rap, Vocorder effects, a blend of Electronic Beats, and a snippet from U.S. President Bush, the song is high energy, fun to listen to, and shows what the band is really capable of.

Maximus Taximus is a fitting conclusion to the album. A trance-like drone with Bouzouki solo and ethereal Vocal hearken back to the Greek tradition once more before fading away with the voice of Radio Pashm in our ears one last time.

The mix on this album is remarkable. Without attention to detail an album like this can get lost with all the electronic effects. But great care was obviously taken to get the balance just right. The electronics never overpower the instruments, though the power of the low- end bass effects can certainly be felt when played back at the proper volume. Vocals are weaved through the mix: at various times up front, blended more into the fabric of the instruments, or nearly a whisper to give that ethereal feeling. A great job by (wait for it…) Max Pashm, who not only leads the group, but arranged, mixed, and produced the album; plus excellent Mastering by Ray Staff and Martin Giles.

The CD package is a simple foldout affair with no booklet insert, only the list of songs, band members, and credits. The brightly colored graphics (which, by the way, match the graphics on the websites) really jump out and scream for attention.

I found the Max Pashm Band last year and had been anticipating the release of this album for quite some time. It has exceeded my expectations, and I can give it a very enthusiastic recommendation. If your musical taste hovers around contemporary World Music/Klezmer/Greek/Balkan Brass, there will be something here for you. Radio Pashm is calling. Answer the call, already!

The Klezmatics are currently on tour.
Here are the dates:

I have posted Klezmer Podcast 47 featuring Max Pashm from the UK. You can listen on iTunes, klezmerpodcast.com and Blubrry.


Of the growing number of Klezmer/Balkan bands in Italy, Municipale Balcanica has the widest reach. And it’s fairly obvious why. Their ability to absorb the music of other cultures and then filter it through an Italian sensibility gives a fresh vibe to the genre. MB (as they like to be called) are a collective of highly talented musicians, but beyond that they bring a spirit to the music that cannot be denied. From a frenzy to slow, beautiful melodies, to peaceful meditation, to their plea for peace where there is war, MB has the ability to evoke all of these emotions from their listeners.

Their second album, Road To Damascus, encompasses all of these qualities. There is a broad range of emotions and musical styles here, and that translates into a thoroughly enjoyable listening experience. Road To Damascus, besides being the title track, is a good description of what this project is all about: The journey the band figuratively takes from their small town in southern Italy passing through the Balkans, Turkey, and the Middle East, with excursions to Eastern Europe and North Africa. Italians have been world explorers since the days of Columbus, so it comes as no surprise that a musical curiosity is what drives MB to explore, embrace, and thrive on the musical styles of other cultures.

The CD booklet tells in a poetic way the context for the album:

MB’s Italian-infused Balkan/Klezmer style is best exemplified by the opening track, Gypsy Train, with its alternating between a fast two-beat rhythm and a Bulgar rhythm. This is their signature sound, and provides a reference for the rest of the album. Other tracks that are styled along these lines are Libano and Alma Cocek.

Jewish music is a big part of the MB mix, as heard on Kolomeyka and Hava Nagila Club Version. Kolomeyka is the song familiar to fans of Klezmer music, and they perform a good, straightforward version of it. On the other hand, the remix of Hava Nagila gives us a fresh look at what is arguably the most recognizable Jewish melody. Trust me, you haven’t heard it this way before. And note the excellent Violin solo.

The Vocal songs on the album are of a wide variety. L’orso Ballerino (The Amazing Dancing Bear) is sung in Italian and sounds a bit like Italian circus music, which would be natural to accompany a dancing bear, but has some Balkan background lines from the band as well. My favorite vocal is L’Aria Migliore (Freshest Air). The Italian language sound beautiful, even if you don’t understand it, and the vocal style on this song is reminiscent of the almost whispering style of the Brazilian singer Joao Gilberto. This is a lovely song, and includes a sensitive Flugelhorn solo by Paolo Scagliola, who adds so much throughout the album. Usti, Usti Baba is a song from Macedonia, sung in the original language. The band does a great job as a Balkan brass band to back the vocal. This song is traditionally performed just before the wedding ceremony. But the addition of grunge Guitar makes it a bit more Punk- just the right ingredient for MB to make it their own. Contessa (bonus track) begins with a Piano solo before the band comes in and the Italian vocal begins. I don’t have the English translation, but the song sounds like a lot of fun for the band.

Some songs lean more toward a Middle Eastern/North African sensibility. Artigiana Di Luma has a Balkan background rhythm and Turkish melody. Radish Lam is my favorite song on the album. Starting with and old scratchy 78 record sound then moving into a clear, modern sound, it has a Middle Eastern melody, percussion, good Clarinet solo, and Electric Guitar. To me, this song blends all the elements that MB does so well. Road To Damascus, the title track, goes even further to the Middle East, adding a Saz to the band’s instrumentation, as well as some electronic effects to keep it current. A Flugelhorn solo sounds great against the strong rhythmic background, as does the lonely sound of the Clarinet. This song gives the feeling of mystery found in the Middle East.

Art is part joy, but also part pain, and The Syndrome Of Babylon is MB’s response to the Gulf war in Iraq and Kuwait. The song is in 5/4 time, an irregular rhythm to show the feeling of war. It has sound clips of radio calls between military units, the voice of the first President Bush, a melody of Brass against Reeds, and a distorted Guitar. The effect is to express danger, pain, and the inhumanity of the conflict. Behind all this, a voice whispers the Lamentation of Gilgamesh, which translates as:

Another bonus track is the Caravan Club Mix, a feature for Clarinet with added electronic sounds. A fun song to end the album.

The album sounds excellent, thanks to the enginnering by Claudio Kougla De Leo, and mastering by Antonio Porcelli. The mix sounds consistent, and all the instruments come through clearly. The vocals are well balanced with the band, and sound stunning on L’Aria Migliore.

There is a good 12-page booklet with the CD which includes most lyrics, credits, musicians, track list, and some excellent photos.

Municipale Balcanica is clearly on the road to success in the world music scene, and Road To Damascus is one journey of many they will be taking. I, for one, am enjoying going along for the ride. Congratulations to Municipale Balcanica for an outstanding and memorable album.

You can hear my interview with Municipale Balcanica by clicking here.

Posted by Klezmer Podcast at 10:27 AM No comments: 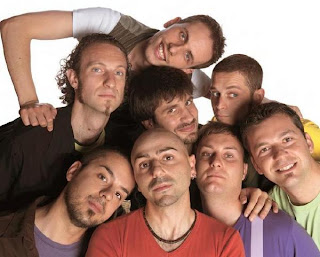 I have posted Klezmer Podcast 46 featuring Municipale Balcanica and their new album Road To Damascus. The podcast is available at iTunes or Klezmer Podcast.com or Blubrry. Check them out at Municipalebalcanica.com.

Posted by Klezmer Podcast at 8:53 AM No comments: