The Other Europeans Kickstarter Campaign

Dear Friends and Fans of The Other Europeans.

we're sooooo close! Thanks to the wonderful generosity of 89 backers (!), our kickstarter campaign has so far generated $8,968!We need just a little more than $1,000 to reach our goal of $10,000 and we're on way to the WOMEX and the gorgeous new double-CD launch. But if we don't reach $10,000 by Sunday, September 25, then none of the pledges turn into actual donations, the campaign fails, and we're back down to $0, a catastrophe! That's only 16 days away!

If you've already pledged a donation to the kickstarter campaign, thank you very much on behalf of the whole band! And if you've been waiting to make your pledge, there's no better moment than now, before the clock runs out. Remember - if you enjoy the music of The Other Europeans, for a mere $20 pledge you will receive a code that lets you download all of the music on the new double-CD. For higher pledges you can receive the CD itself, videos of the band's trip to Moldova, and much more. But ONLY if we reach the goal of $10,000. So please consider making a donation pledge now and help the splendor of The Other Europeans to go on shining! Thank you!

Best wishes to all, Alan Bern

Posted by Klezmer Podcast at 9:50 PM No comments:


Coda
ABOUT THIS PROJECT: CODA is the Graduation Film of Writer/Director Jonathan Tomlin from the MA Filmmaking Course of the London Film School. In particular, this film is concerned with the relationship between self-expression and self-preservation. The struggle to survive is as important to an artist as her instrument or her talent. An extraordinary artist is someone who can transform suffering into inspiration and vice versa. This film strives to travel the world through music and reach audiences with a story that can be felt across any border and in any language. Music is a universal language with as many styles as there are cultures in the world. Music is at the core of CODA’s narrative. There is no dialogue and no subtitles. The film will run approximately 10-12 minutes.
THE STORY The story of a classically trained Violinist travelling through Eastern Europe in search of a deeper connection to music and to her own life. She lives as a full-time Traveller and Street Performer (Busker) leaving behind the rigid confinement of her Classical formation in order to push the boundaries of her life and her music. She plays with exquisite technique, but her style is as varied as the stamps on her passport. She is particularly inspired by Jewish Folk music, known as ‘Klezmer’ a unique style of music capable of expressing great joy, deep sadness or fierce anger. She awakens one morning alone in a Budapest Train Station. She has no money and no hope, just her violin. She takes up her violin and plays to the passengers in the Train Station, but no one stops to listen and no one gives her donations, except for one person, a little girl. The Violinist plays for the Girl and the Girl gives the Violinist something much more valuable and unexpected than any donation.
WHY WE NEED YOUR SUPPORT We are looking to match or exceed our initial investment of $5,000. Your generous donation will equip a talented, international team of filmmakers with the tools and support needed during the shoot and post-production of the short.
THE SHOOT: We will film for 4 days in September in Budapest Hungary, where we have cultivated a strong co-production led by Producers Daniel Higley, Richard Larkin and Julia Berkes. We will invest in the support of our cast and crew and towards the rental of our Camera package. MUSIC & SOUND DESIGN: Music and sound in particular are at the very core of this story and the main character. The music has been composed by award winning Composer Enrica Sciandrone, http://enricasciandrone.com. and will be recorded in a professional studio in collaboration with Sound Designer George Robinson, who is constructing a soundscape of the world of the film.
POST PRODUCTION: During October the film will be edited and sent to a professional post-production house for color grading and audio re-recording (Final Mix).
The film will be completed in November, 2011.
THANK YOU: I am very grateful for all the support and good fortune that we have already received during the pre-production for this film. Over the last 6 months this film has reached this point because of the contributions of each new team member that committed their talents and energy. I am very proud to lead this team, but I am even more excited about the film that we can make. Please join our team and help us reach our goal. Thank you, Jonathan Tomlin
Please visit our website at: http://www.wix.com/jonathantomlin/coda
Posted by Klezmer Podcast at 6:03 PM No comments: 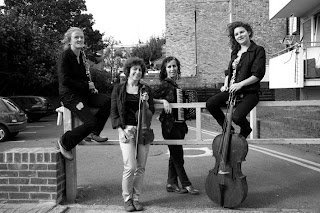 Listen to the podcast here:


Posted by Klezmer Podcast at 3:03 PM No comments:


Dear Friends,
we just passed the $7,000 mark on our fundraising website! A very heartfelt thank you to everybody who already contributed! I now do hope to reach our minimum goal of $9,300 - which would at least cover the basic cost of the project (and really nothing more... Arkady will not see any honorarium at this point, I am donating three months of my working time, and most of our cooperators, many of them the best in their field, have volunteered to help without any charge!). So please keep supporting the project and make our group bigger - tell your friends about this important project!
http://www.kickstarter.com/projects/1985622982/arkady-gendler-an-artistic-documentation
All the best,
Christian Dawid

Posted by Klezmer Podcast at 11:21 AM No comments: