Brian Bender on tour in Europe w/Little Shop of Horas 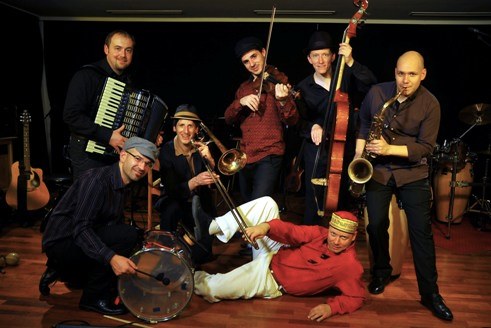 Brian Bender will be on tour in Europe (Russia, Germany, Austria) from October 24th-Nov. 12th with his band Little Shop of Horas and also as a special guest with the Russian Klezmer band Dobranoch

The group is an international band made up of musicians from three countries:

To read Brian's blog "A Klezmer Odyssey" about his previous tours in Europe: www.klezmerodyssey.blogspot.com

Posted by Klezmer Podcast at 7:39 PM No comments:

Here are a few information about our Klezmer Marathon!

Klezmic Zirkus was formed in 2006 during the ‘Nuits Nomades’. At the very beginning of this music group from Liege (Belgium): the clarinettist Aurélie Charneux. It was her musical sensitivity for Klezmer music that has brought together the members of the group. The band quickly attracted notice thanks to its re-appropriation of the Klezmer genre. A condensation of virtuosity and madness, a festive energy without any concession…

Ever since, Klezmic Zirkus has performed more than 350 concerts on a row (Esperanzah, Dranouter, La Semo, Un soir autour du Monde, …) and produced two albums (Vitamine K, 2007 and 13 chemin des Mandarines, 2010) at Homerecords.be.
Klezmic Zirkus henceforth evolves in the big family of Klezmer at the international level: the group has toured in Europe and Moscow, and collaborates regularly with the Canadian singer and songwriter Geoff Berner, who appreciates particularly the impetuosity of the group. And for October of 2012, a musical project of large proportions: a series of concerts with the amazing New Yorker clarinettist David Krakauer (The Klezmatics, Klezmer Madness, Abraham inc, …), standard bearer of the Klezmer movement, always at the top of modernity of this music style in which he excels.

Klezming Pool
A third album has been be released on September 26nd 2012!
Dive and apnoea in the huge depth of Klezmer! Some traditional pieces klezmified without moderation, and a couple of compositions of Aurélie Charneux, which decorticate the rhythm, the modes and atmospheres of Klezmer. An energy henceforth more rock, a sound more electronic but which keeps on being very organic and compact at the same time. And a piece live recorded during the ecstasy of the ‘Fête en Pierreuse’ (Liège - Belgium)!

Posted by Klezmer Podcast at 9:00 PM No comments:


Here is something new from Israeli band Boom Pam:

Posted by Klezmer Podcast at 4:30 PM No comments:

New From Kabbalah- Devil... on the road


Posted by Klezmer Podcast at 3:27 PM No comments:

Klezmer Podcast 94- Gefilte Swing. While visiting Paris, I was able to catch a performance by Gefilte Swing, a band that specializes in Swing-Era Yiddish song. They have great energy, and have a real love for this music. We hear the track Besarabye from the album Yidl Mitn Swing. And check out the retro 78- record style label on the CD! Run time: 17:56.

Posted by Klezmer Podcast at 2:34 PM No comments:

Posted by Klezmer Podcast at 12:49 PM No comments: 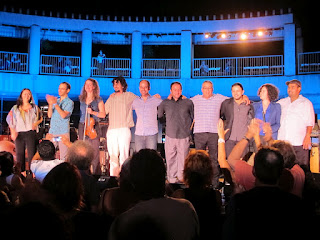 Klezmer Podcast 93- Roberto Rodriguez and Orquesta Sarabia. One of the things I like most about Roberto Rodriguez is that I never know what he will do next. It is always a surprise and a delight to discover his music, in whatever form it takes. And Orquesta Sarabia is no exception. An exotic blend of Jewish, Latin, and Arabic rhythms and melodies blend perfectly to take us far away and at the same time make us feel right at home. Roberto performed at Skirball Center in Los Angeles on 9 August, 2012. His passion for this music is undeniable. Run time: 19:15.


Posted by Klezmer Podcast at 4:15 PM No comments: