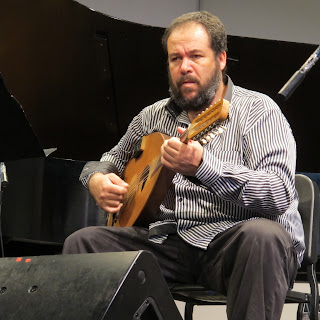 This episode features and interview with Amos Hoffman and Yale Strom, just prior to the Desert Caravan concert at San Diego State University on April 12, 2017. A Guitar and Oud player, Hoffman has teamed with Pianist Noam Lemish for a new project of jazz-influenced Middle Eastern songs. Joined on this concert by Yale Strom and his band Hot Pstromi, a fusion of this music with Klezmer and Yiddish repertoire resulted in a new direction for Jewish music, something Strom has been on the forefront of for many years. We also get to hear one of the songs from the concert that was recorded live.
Run time: 17:09

Posted by Klezmer Podcast at 5:04 PM